Is Roundup what you should use in your Garden?

Roundup is sold in so many stores I am really surprised I haven’t bought any yet!

It’s near the check out at Home Depot and there’s a large display of it in the Garden Section of Walmart and other big box stores.  I see my neighbors sometimes walking around their yard spraying anything that looks green! If that doesn’t make sense to you remember I live in Arizona so most yards are gravel.  Anything green unless planted is usually a weed. 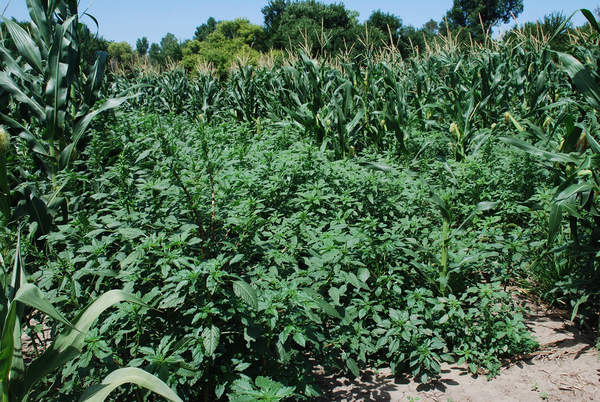 Do you have weeds in your Corn Field?

What has been thought of as a fairly benign weed killer and is sold in so many countries around the world may not be as benign as once thought!  Remember that DDT was once thought to be the greatest thing for agriculture!

This is what Cornell said about Glyphosate in 1992

Sounded pretty good then, however any poison is subtle and can be misused or misapplied.

This is what the April 2013 Activist Post has to say about Glyphosate!

This is what the April 2013 Food and Water Watch says…

And Finally this is what Wiki says…

Glyphosate has a United States Environmental Protection Agency (EPA) Toxicity Class of III (on a I to IV scale, where IV is least dangerous) for oral and inhalation exposure.[48] Nonetheless, as with other herbicides, the EPA requires that products containing glyphosate carry a label that warns against oral intake, mandates the use of protective clothing, and instructs users not to re-enter treated fields for at least 4 hours.[48][49] According to some Monsanto sponsored studies, Glyphosate does not bioaccumulate and breaks down rapidly in the environment.[50]

What I understand this article to say is…

The half life of Glyphosate in your soil is 60 days.  That means it is still 50% toxic after 2 months.  I wonder how long it stays persistent?

Glyphosate makes a lot of money for Monsanto.

Glyphosate’s mode of action is to inhibit an enzyme involved in the synthesis of the aromatic amino acids tyrosine, tryptophan and phenylalanine. It is absorbed through foliage and translocated to growing points. Because of this mode of action, it is only effective on actively growing plants; it is not effective as a pre-emergence herbicide.

Deliberate ingestion of Roundup in quantities ranging from 85 to 200 ml has resulted in death within hours of ingestion, although it has also been ingested in quantities as large as 500 ml with only mild or moderate symptoms.[62] There is a reasonable correlation between the amount of Roundup ingested and the likelihood of serious systemic sequelae or death. Ingestion of >85 ml of the concentrated formulation is likely to cause significant toxicity in adults. Corrosive effects – mouth, throat and epigastric pain and dysphagia – are common. Renal and hepatic impairment are also frequent and usually reflect reduced organ perfusion. Respiratory distress, impaired consciousness, pulmonary edema, infiltration on chest x-ray, shock, arrythmias, renal failure requiring haemodialysis, metabolic acidosis, and hyperkalaemia may occur in severe cases. Bradycardia and ventricular arrhythmias often present prior to death.

Or give it to your Mice!

A 2009 study on mice has found that a single intraperitoneal injection of Roundup in concentration of 25 mg/kg caused chromosomal aberrations and induction of the micronuclei.[72]

Why not use this instead of Roundup?

You are not a commercial farmer, you do not have acres upon acres of weeds to kill.  You have a 1/4 acre parcel, or maybe even 1/2 acre lot.  In the amount of time you spray you can also Hoe!  Think of it this way, if you do not get that plant sprayed at it’s most perfect time, (before flowering) it will probably come back from seed anyway.  There are also a lot of plants out there that will survive a dose of glyphosate.  Do you know which ones they are?

A Hula Hoe costs $13-15,  Roundup costs nearly $80 for the 2 1/2 gallon version.  A Hula Hoe lasts for a good 10 years or longer.  Roundup once sprayed stays in the ground and has to be resprayed every season.  Using a hoe gives you exercise, spraying a poison on a windy day may shorten your life.  Which way do you prefer….

If you don’t have a Hula Hoe try something else!

Any tool will do…

Don’t use poison to kill weeds.

Use your head and don’t poison your soil!

1 Response to Is Roundup what you should use in your Garden?