What is the significance of Typhoon Haiyan?

It was only last week when Typhoon Haiyan (Locally called Yolanda) made landfall in the Philippines.

This typhoon was bringing with it sustained winds of 195 mph with gusts to 235 mph.  Weather researchers and meteorologists around the world are evaluating whether it is or will be the strongest storm ever.

Tacloban was devastated by the storm surge

The Economist calls Typhoon Haiyan a stress test.  Responding to this disaster as quickly as possible is critical to save lives.

But like the Economist goes on to say, preparing for the next is also critical.  How many storms can the civilized world react to with aid?  Perhaps if the military budgets were reduced by a few percent we might be able to form a worldwide global relief effort that is prepared to respond at a moments notice thus preventing or reducing the time lag that occurs after a disaster such as this.

How to Prepare for the Next Storm?

The Economist points out the basic economic problem.  Many people live in substandard housing that is vulnerable to being washed or blown away in storms.  This is probably the biggest issue when it comes to losing lives.

The other issues that play a major role in disaster relief is communication and transportation.  Communities that lose communication and means to get relief supplies to their community are extremely vulnerable to civil unrest, basic sanitation issues and the ability to get food and water supplies for their inhabitants.  Globally this is where our leaders should concentrate their efforts.

Water is critical to survival

In researching “adaptation to disasters”, I came across a 194 page publication out of the UK called “Toward Resilience-A guide to diaster risk reduction and climate change adaptation”.  Needless to say I have not read the whole document but it strikes the right cords.  It is aimed at NGOs  and seems like a good thoughtful publication.

Here is an excerpt from this document…

“Hazards are potentially harmful natural phenomena or human activities that, when they occur, may cause loss of life, injury or other health impacts, property damage, loss of livelihoods and services, social and economic disruption, and environmental damage.

Climate change effects are changes in the climate as a result of excessive emission of greenhouse gas. Effects include temperature increases on land and at sea; rises in sea-level; the melting of glaciers and ice caps; and changing and irregular rainfall patterns. As a result of the effects of climate change, existing climate-related hazards such as droughts, floods and windstorms are projected to increase in frequency and/or intensity. The planet is locked into some degree of climate change, but technological and political decisions to reduce it can still be taken.

Both exposure and vulnerability are compounded by other societal and environmental trends, for example, urbanization, environmental degradation, and the globalization of markets.

Thus, to reduce disaster and climate change risk, exposure needs to be minimized, vulnerability reduced, and capacities for resilience strengthened in ways that address both disaster and climate change risk simultaneously, neither approach compromising the other. This is a dynamic process requiring continual effort across economic, social, cultural, environmental, institutional and political spheres to move from vulnerability to resilience.” 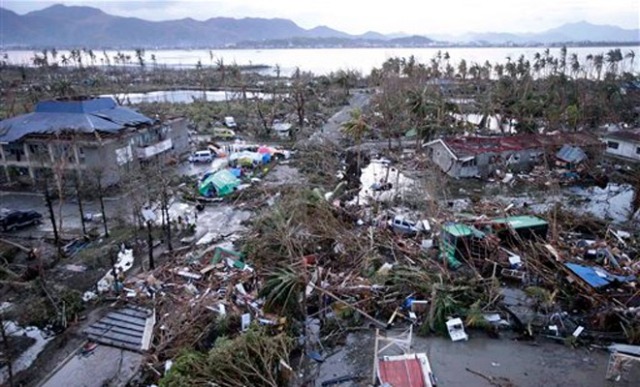 What does it mean?

On the other hand, the climate deniers will be shouting out that a storm such as this has occurred before (Hurricane …..that hit Texas in 1960) and is just an indicator of normal fluctuation of weather events.

The bottom line is that recorded extreme events are happening more and more on a regular basis.  Whether it be the Tornadoes that ripped apart Joplin Missouri or Oklahoma City, Hurricanes Katrina or Sandy, extreme drought in the US Midwest, Typhoons in China Southeast Asia, windstorms across the UK…it all points to one thing.  Climate disruption and instability.

We must work with our governments to strengthen our resilience, improve our infrastructure and improve our abilities to respond.

In the mean time!

If you have the inclination to donate to the relief efforts please do so.  There are tens if not hundreds of organizations that have mobilized to send relief supplies to the Philippines.  Pick one that has a low overhead and not one whose CEO makes over $250,000 a year!  You can find that information at…

Or you can always find one your self by googling Typhoon Haiyan Disaster Relief.  Quite a few charities have their own Philippine contact.  Remember that 1 US Dollar equals around 43 Philippine Pesos right now.

Climate disasters will not go away anytime soon.  Learn how you can prepare and adapt!

Michael Mann,  The Director of Penn State Earth System Science Center, Author of “Dire Predictions” and “The Hockey Stick and the Climate Wars” a well known meteorologist and climate change scientist provides the following article that brings together the science quite well in the following article.  It is well worth the read.

1 Response to What is the significance of Typhoon Haiyan?