The Cats of Ephesus

In the Ruins of Ancient Ephesus live hundreds of cats. 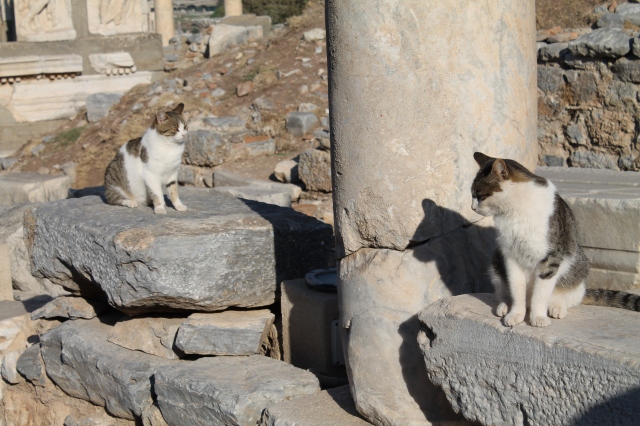 These seemingly unowned cats do not appear wild and yet there is no obvious sign of any homes nearby where they may live.  They appear well fed and lie around in the ruins like they own them. It appears to be a mystery about how they arrived and how they survive.

It is said that Cleopatra brought cats as a gift to Caesar Augustus in Rome.  Perhaps in her visits to Ephesus she also introduced cats here?

Ancient Ephesus itself is a relatively newly found ruin, only in the  late 1800’s did the ruins get newly discovered.  Ephesus had always been known of to the local populace, only the ruins themselves, severely damaged by an earthquake  in 614 AD, had not been excavated. It is said that only 10-15% of this ruin has been excavated.  Every year additional excavation is completed.

“The history of archaeological research in Ephesus stretches back to 1863, when British architect John Turtle Wood, sponsored by the British Museum, began to search for the Artemision. In 1869 he discovered the pavement of the temple, but since further expected discoveries were not made the excavations stopped in 1874. In 1895 German archaeologist Otto Benndorf, financed by a 10,000 guilder donation made by Austrian Karl Mautner Ritter von Markhof, resumed excavations. In 1898 Benndorf founded the Austrian Archaeological Institute which plays a leading role in Ephesus today.[57]”

The history of this area in Turkey, especially to an American, is mind boggling.  While we were still dragging sticks as weapons and living in thatched huts, the Greek, Persian, and other nationalities of the Mediterranean were building cities of marble.

“The area surrounding Ephesus was already inhabited during the Neolithic Age (about 6000 BC), as was revealed by the excavations at the nearby höyük (artificial mounds known as tells) of Arvalya and Cukurici.”

“Scholars believe that Ephesus was founded on the settlement of Apasa (or Abasa), a Bronze Age-city noted in 14th-century BC Hittite sources as being under the rule of the Ahhiyawans, most probably the name of the Achaeans used in Hittite sources.” 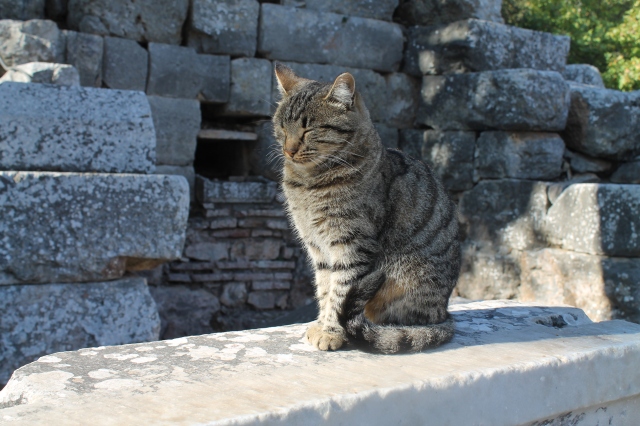 “Ephesus was founded as an Attic-Ionian colony in the 10th century BC on the Ayasuluk Hill, three kilometers (1.9 miles) from the center of ancient Ephesus (as attested by excavations at the Seljuk castle during the 1990s).” 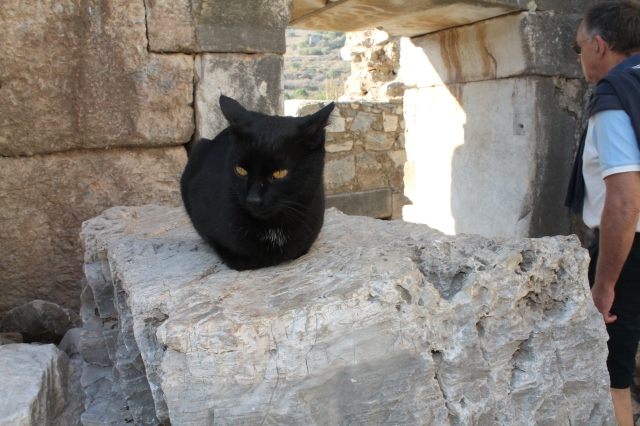 The cats own this ancient city.

When Alexander the Great defeated the Persian forces at the Battle of Granicus in 334 BC, the Greek cities of Asia Minor were liberated. The pro-Persian tyrant Syrpax and his family were stoned to death, and Alexander was greeted warmly when he entered Ephesus in triumph. When Alexander saw that the temple of Artemis was not yet finished, he proposed to finance it and have his name inscribed on the front. But the inhabitants of Ephesus demurred, claiming that it was not fitting for one god to build a temple to another. After Alexander’s death in 323 BC, Ephesus in 290 BC came under the rule of one of Alexander’s generals, Lysimachus. 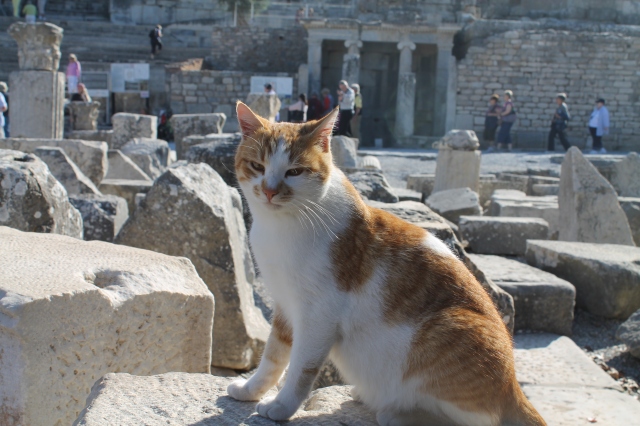 The cats were totally unafraid of people.

“Ephesus, a territory that was traditionally Greek to the core,[27] became subject of the Roman Republic. The city felt at once the Roman influence. Taxes rose considerably, and the treasures of the city were systematically plundered.”

“When Augustus became emperor in 27 BC, he made Ephesus the capital of proconsular Asia (which covered western Asia Minor) instead of Pergamum. Ephesus then entered an era of prosperity, becoming both the seat of the governor and a major center of commerce. According to Strabo, it was second in importance and size only to Rome.”

“Until recently the population of Ephesus in Roman times was estimated to number up to 225,000 people.”

“The most recent estimate puts the area occupied by Ephesus at 224 hectares (550 acres) at its largest extent in the Roman period. This figure includes uninhabited areas such as roads, public and civic space. If realistic population densities of 150 or 250 people per hectare are applied, this gives a range of 33,600 to 56,000 people.” 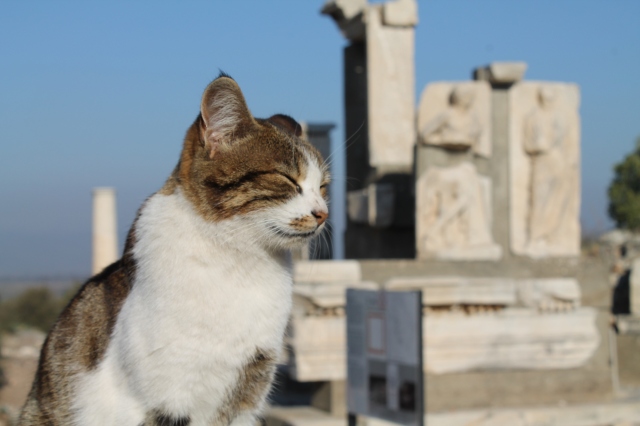 The Temple of Diana, Library of Celsus , an Open Air Theatre that could seat 25,000 People,  and other structures are the testiments to the society of that day.

“The city was famed for the Temple of Artemis (Diana),[34] who had her chief shrine there, the Library of Celsus, and its theatre, which was capable of holding 25,000 spectators.[35] This open-air theater was used initially for drama, but during later Roman times gladiatorial combats were also held on its stage, with the first archaeological evidence of a gladiator graveyard found in May 2007″ 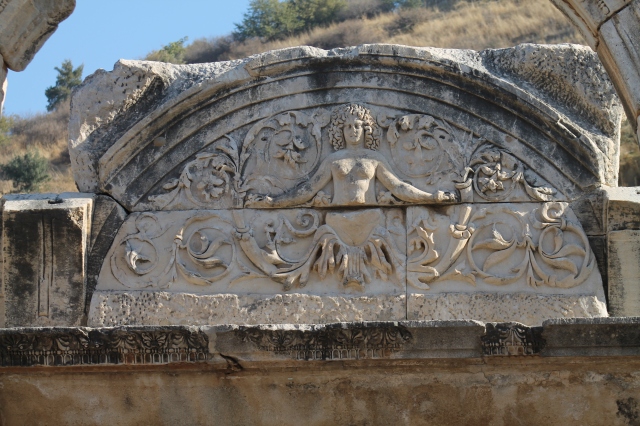 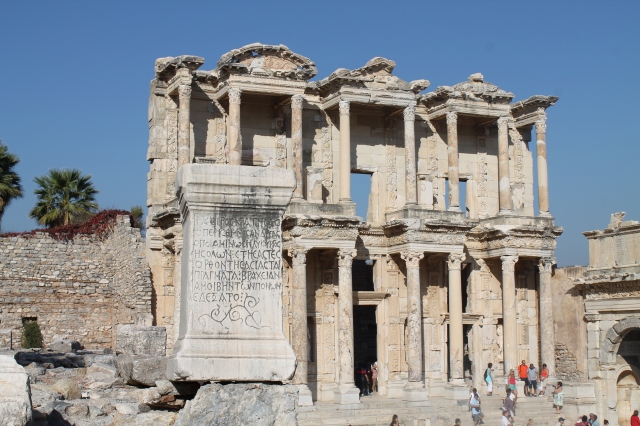 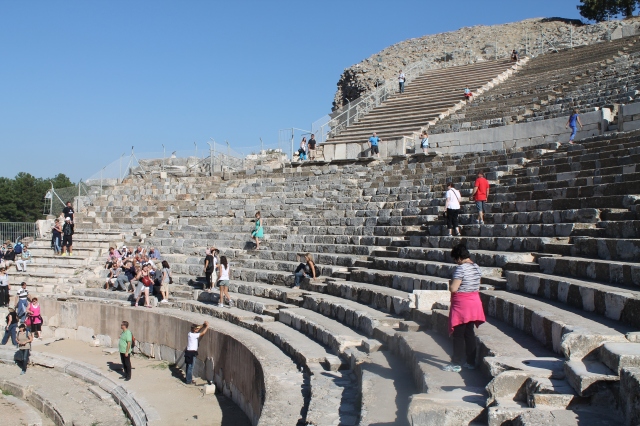 The Downfall of Ephesus

“The town was partially destroyed by an earthquake in 614 AD. The city’s importance as a commercial center declined as the harbor was slowly silted up by the Cayster River (Küçük Menderes).”

While the above two sentences  are short, there is a lot that is unsaid in them.  The earthquake destroyed much of the city and made unstable many of the larger structures.  This in combination with burgeoning populations around the surrounding major city in the Mediterranean led to large areas of farming and deforestation.  It is said that the siltation that filled the shallow harbor was exacerbated by the actions of farming and logging that occurred over centuries.  The concepts of conservation and sustainability were probably known to a lesser extent but the practices were not implemented to any extent that would save the city.

Once the port to Ephesus was no longer accessible from the Mediterranean Sea, the ability to conduct commerce was severely diminished.  I imagine slowly over time the population dispersed to the distant shoreline to develop a new port that would serve their needs. 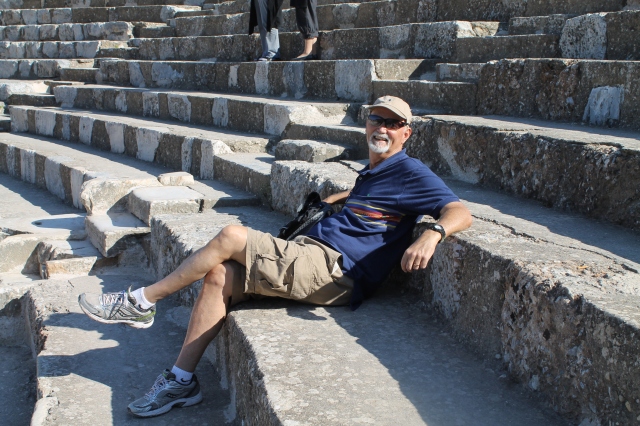 Waiting for the Gladiators!

I’m not the only blogger who has enjoyed Ephesus. Curious Cat on the Run published a great blog in 2012.   I hit on this blog when I was researching my trip.  She gives some good tips to you in her blog for travel there.  I went in late October and was still blown away by the number of tourists.  Look for yourself at the crowds on the paved road leading to the Library! 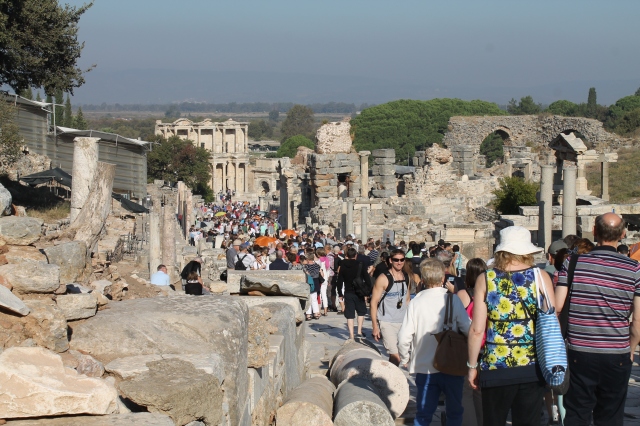 A typical day at Ephesus

5 Responses to The Cats of Ephesus