Wupatki National Monument, a Window to the Future

The climate they thrived in was different than it is today.  They were able to plant and raise crops that along with native plants and hunting provided them with enough food to survive.

The Box Canyon and Lomaki pueblos show the ingenious use of the natural geography to provide water to drink as well as raise crops.

These people were masters of Sustainability.  Collecting water from overland flow was how they grew their crops.

Why they left is mostly a mystery. What research has been done points to their exodus being caused by an extended period of drought!

Without water to drink or grow crops many of the Native Americans in the Southwest left this environment and settled in the Southern Colorado foothills and other locales that would provide them with the necessary water of life. 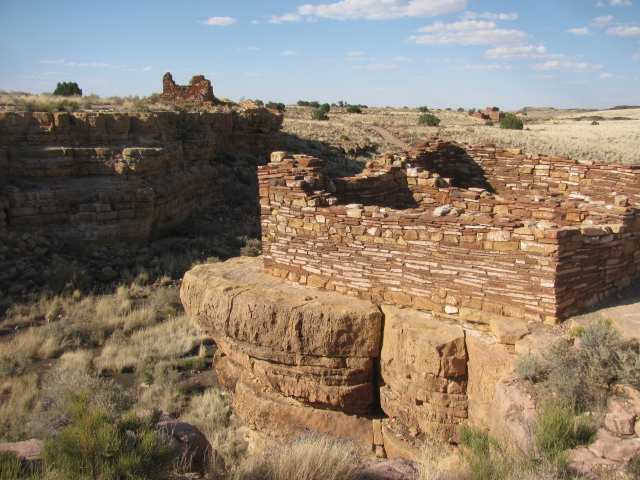 One of the larger ruins at Wupatki is the Citadel.  A masterpiece of defensive pueblo construction.  This pueblo perched on a basaltic outcrop housed a larger population not far from Lomaki and Box Canyon ruins.  A large basin to the South may have provided deep soils for farming.  Off in the distance are the sacred San Francisco Peaks and Sunset Crater.

The Citadel over looks the surrounding lands

Built on Basalt outcrops with walls of sandstone and basalt

You can see for miles!

The San Francisco Peaks stand out in the distance

A Window to the Future

Hopefully we won’t need to move from our homes!

We don’t know what the future may bring.

2 Responses to Wupatki National Monument, a Window to the Future