Native Americans thrived in Central Arizona between 1000 and 1250.

It is estimated that there were over 1,000 Indian ruins surrounding Payson Arizona and the Rim Country.  Payson is definitely a Central Arizona town.  The geographic center of the State is approximately 11 miles due West of Payson near the confluence of Pine Creek and the East Verde River.  Having some of the few perennial streams in Arizona, native peoples thrived in the 5,000 foot elevation. No too hot and not too cold!   Some of the streams flowing off the Mogollon Rim include Tonto Creek,  Haigler Creek, and Colcord Creek to the East of Payson, and Webber Creek, the East Verde River and Pine Creek to the North and West.

Payson’s Rim Country website has this to say about the people who inhabited these ruins.

The people who lived in the Rim country — known variously as Mogollons, Ancient Ones or Bunheads — were literally surrounded by the Sinagua to the north, the Anasazi to the northeast, the Mogollon to the southeast, the Salado to the south, and the Hohokam to the southwest.

For more information on the local History of Native American settlements in Central Arizona, check out the following site.

Wikipedia talks about why the native americans migrated out of the area.  Prolonged drought was one of the factors.

Migration from the homeland

It is not entirely clear why the Ancestral Puebloans migrated from their established homes in the 12th and 13th centuries. Factors examined and discussed include global or regional climate change, prolonged periods of drought, cyclical periods of topsoil erosion, environmental degradation, de-forestation, hostility from new arrivals, religious or cultural change, and even influence from Mesoamerican cultures. Many of these possibilities are supported by archaeological evidence.

Read about what Wikipedia has to say about the Ancient Pueblo Peoples.

The Rim Country had water to support many large villages during this time.

Many of the streams in our area flow water yearlong because the underlying strata of bedrock forces water to the surface along these drainages.  Bedrock along water was used on an opportunity basis by the native people to congregate and grind corn, mesquite beans and other native foods as well as make paints for decorating. 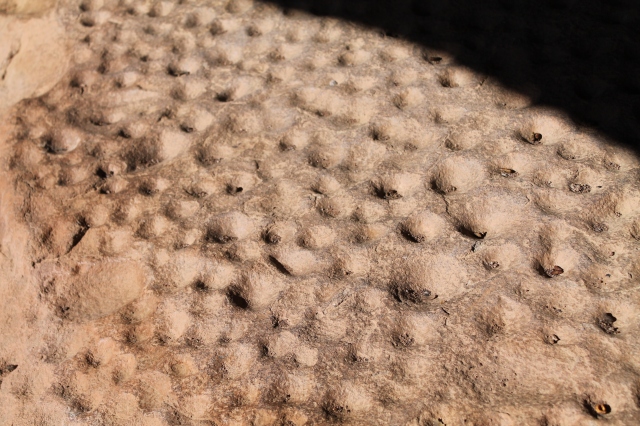