What a fine Environmental Mess you got us into now Oilie!

Originally, the APW County Park was a natural wetland along the shores of Arthur Kill.  This wetlands shrubs and sea grasses naturally protected the shoreline from any tidal surges.  Its natures way.  However in order to allow commercial shipping to move further up the inlet to docks in New York and New Jersey. the government in their infinite wisdom dredged to deepen the channel.  In this particular instance, the Corps of Engineers in the 1950s decided that this was the location to dump its dredged material. Unfortunately the dredged material was contaminated with large quantities of Lead, Arsenic and other heavy metals.

After dumping what they could there, the Federal government eventually convinced the County to take ownership of this land with the requirement, and funding no doubt, that it cap the fill, add topsoil and seed it.  The resulting area turned out to be an urban riverside park enjoyed by many of the local citizens of this local NJ community.

Hurricane Sandy came along on a balmy October night and pushed a  15 foot surge that came into Raritan Bay and overflowed into every river and wetland in this coastal area.  As a result it washed over this park and then as it retreated back into the ocean it reclaimed the shoreline and the dredged material along its edges.  The shoreline cap material was washed away and exposed the arsenic laced soil to the whim of the tides.

To add insult to injury, during the storm a 300,000 gallon diesel fuel spill occurred just downstream of the park.  This spill in turn washed ashore over much of the wetland areas and beaches along this industrial area. You can imagine the picture and the smell as you walked the banks of this park 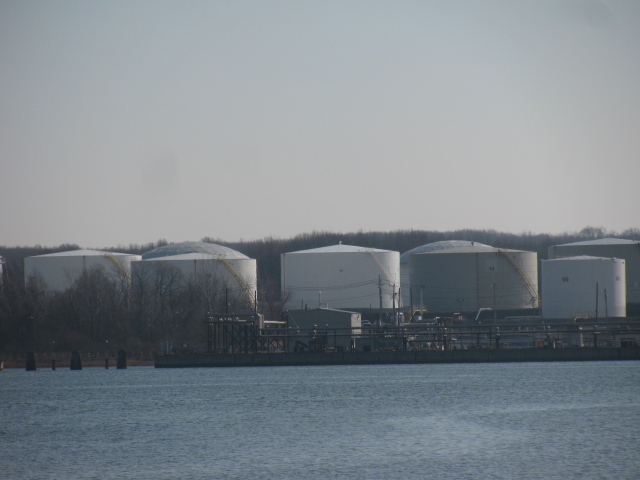 Tank Farm Next to Park

So as all this was happening, the local sewage pump stations  are overwhelmed with storm surge and the pumps and power is shut down.  Usually back up generators help move the raw sewage on to the treatment plants, but oh no everything shuts down for a week except the flushing of toilets.  An estimated 75 million gallons of raw sewage is pumped into the bay within miles of the park.  So over 1/2 billion gallons enters the Bay. This when mixed with 300,000 gallons of diesel and arsenic laden soils makes a toxic soup that is hard to stomach (no pun intended).

Haven’t we learned anything yet?

What a shame that a natural wetland was filled in.  Lesson Learned – The least cost alternative is not always the best.

Why should we have to deal with contaminated materials along sensitive shoreline areas. Do we need more government intervention or should we make the large oil companies pay for safer storage areas.  Unfortunately, urban industrialization drives our economy.  Unfortunately sewage is sewage.  How we handle it hasn’t changed much over the decades.  What do we need to do to change our ways? What do we need to do to correct old infrastructure?  Haven’t we learned any environmental lessons at all?

Let’s reduce our dependence on fossil fuels and make the oil, gas, and coal companies pay foe cleanup of their messes.  A novel idea would be to keep their plants, refineries and pipeline away from our sensitive streams and wetland areas.  Demand of our politicians that our government keep our shorelines safe, make oil companies take responsibility for their actions, and make them use their profits now to find new an better alternative energy sources.’

2 Responses to What a fine Environmental Mess you got us into now Oilie!