Survive a Winter Storm and never run out of Fresh Veges!

Two Flagstaff Arizona men have come up with a new way to make money as well as provide their community with food during emergencies.

FLAGSTAFF — In a small room near the Flagstaff Pulliam Airport, Ron Brewster and Yosef Bender are taking steps to protect your dinner plate from natural disasters and terrorist attacks.

In a warehouse with no windows, the two men have begun to transform a barren space into a lush garden with nutrient-rich leafy greens that have names like Magenta Spreen, Deer’s Tongue, Ovation and Mesclun.

Their secret to growing enough produce that would generally need a half-acre of land using traditional farming techniques in just a 300-square-foot box is simple.

The two men are growing all of their produce vertically on specially constructed walls.

Tricking nature to grow more produce is nothing new — ancient Egyptians diverted rivers to irrigate crops while sewage was used as fertilizer by the ancient Greeks.

But in a new era when consumers ask about the carbon footprint of their corn and are willing to pay more for fresh-off-the-farm organic produce, their fledgling Green Sky Farm has the potential to turn empty warehouses and strip malls into neighborhood gardens.

For the full article Read on….

This is a prime example of growing local and being sustainable in the time of change.  It cuts down the carbon footprint and can produce more food per square foot of area than conventional farming.  I read about this in a science fiction book years ago and its finally becoming a more common practice!  Why aren’t we converting locally to this type of endeavor everywhere?

A Vision of the Future

The science fiction ideas from the brilliant minds of Robert A. Heinlein, Arthur C. Clarke and Isaac Asimov are truly coming alive today. It may not be exactly like Heinleins “Farmer in the Sky” where arable land runs out and mankind is forced to journey to Ganymede to grow food for the planet.  But the new direction in farming is pointing to vertical.

Issues to deal with in the future include the following taken from Scientific American Article on “Growing Skyscrapers, the rise of Vertical Farms”.

Read the full Scientific American article on vertical farming at the link below. 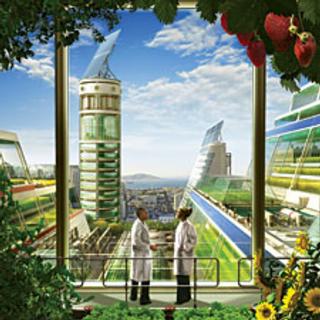